Evolution an examination of the relation of dinosaurs and birds

Friday, August 31, Theropod Dinosaurs The theory of evolution claims that birds evolved from a small, carnivorous reptile known as the theropod dinosaur. In fact, however, a comparison of birds and reptiles shows that these classes are very different from one another and that no evolution can have taken place between them.

Sensory organs accumulated into a mass at the front of the body over the course of evolution have now become a seminal feature of evolution. Protecting this vital organ is the skull, a bony structure that must closely encase the brain throughout its entire development—from embryo to adult.

It seems only natural for the skull and brain to be closely connected to each other throughout development. How can two structures evolve as one entity? Recently, researchers at Yale formally mapped out this relationship between reptile and bird brain and skull roof development for the first time. 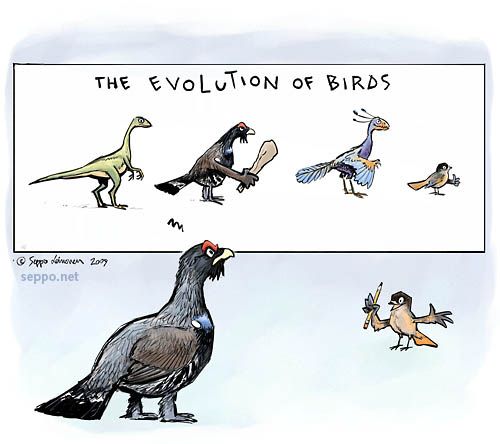 Through combined approaches in fossils research and developmental biology, researchers have been able to show for the first time that the growth and evolution of the brain has also triggered corresponding changes in structure and shape of the skull for millions of years.

Photo courtesy Matteo Fabbri In order to understand how the brain and skull work together, the fossil record can help distinguish how skull is separated into different parts that correspond to different parts of the brain. The presence of this partition, present in mammals and reptiles alike, means that it has major implications for the morphology of the skull and how it evolves with these parts of the brain over time.

This close examination enabled the Bhullar Lab to closely study the link between brain and roofing bones of the skull in early development. While the fossil record has long been used to frame the evolutionary relationship based on morphological differences at a macro-level, comparative embryology allows for the developmental level of relation to be addressed in evolution.

The Bhullar Lab also used CT scanning—which combines many X-ray measurements to create an cross-sectional image of an object without cutting into it—to examine the bone-to-brain relationship in embryos for the first time.

Despite the physical differences of an alligator, lizard, and modern-day chicken, this technology simultaneously visualized and compared their developing brains and skull roofs, revealing that they all share the same developmental pattern.

All three taxa showed direct, one-to-one correspondence between the developing forebrain and midbrain with the earliest stage of development of the frontal and parietal roof and sides bone areas of the skull.

For every degree of development by the brain, the skull develops to the same extent. Previous studies assumed that the avian frontal had a fused origin that caused the resulting shift in avian skull-roof element identity. These findings collectively support the notion that the brain is important in patterning the skull roof.

Photo courtesy Matteo Fabbri Not only did Fabbri and the Bhullar Lab find that there was there a shift in morphology and relative size to skull from reptiles to birds, but also in allometry of the brain and skull. Allometry is the proportional change relative to body size—specifically the brain and skull in this case.

In this case, there was negative allometry between the brain and skull during development of reptiles, meaning that the brain is relatively large in early developmental stages, then becomes smaller with respect to the skull during growth.

Birds, on the other hand, exhibit positive allometry with a large brain at the hatching stage relative to the skull; the brain continues to expand during development into adulthood.

While the fossil record is useful for examining morphological similarities and differences across species, it leaves out gaps in comparative morphology and can sometimes lead to mistakes in research. Moving forward Officially recognizing the link between the skull and brain patterning in reptiles and birds is a significant step in understanding how certain morphologies have developed in reptiles and birds.The anklebone (astragalus) of dinosaurs presents a characteristic upward projection, the ‘ascending process' (ASC).

The ASC is present in modern birds, but develops a separate ossification centre, and projects from the calcaneum in most species.

The scientific question of within which larger group of animals birds evolved, has traditionally been called the origin of birds. The present scientific consensus is that birds are a group of theropod dinosaurs that originated during the Mesozoic Era.

Archaeopteryx, the oldest known ancestor of modern birds, could provide clues to the origin of avian flight. In March , scientists reported that Archaeopteryx was likely capable of flight, but in a manner substantially different from that of modern birds. The implications of this finding opened a new arena regarding the importance of dinosaurs to our understanding of evolution and generated new concepts regarding the origin of birds from extinct dinosaur ancestors.

Theropod dinosaurs, widely accepted as the ancestors of birds, do not show a step-by-step gradational change to Archaeopteryx, the first known benjaminpohle.com vast majority of traits reverse themselves at least once in the cladistic sequence.

The Fact Of Creation: Theropod Dinosaurs